CHAMPIONING THE RIGHTS OF WOMEN FISH WORKERS IN TANZANIA

Hadija Malibiche, like millions of other women living along the coast in Tanzania, works in the small-scale fisheries sector.  For more than 10 years she has been involved in fish processing and seaweed farming in Mtwara, in southern Tanzania.  Although women make up more than 50% of workers in the small-scale fisheries sector, they are frequently excluded from decision making processes and are often invisible to policy makers. Respecting the rights of women to participate fully in fisheries management represents an enormous challenge to traditional attitudes in many fishing communities in Tanzania.

Coastal communities generally have limited access to information that can challenge existing value systems and catalyze attitude and behaviour changes towards women.  This is where Sea Sense is aiming to make a difference.  Through an innovative education and outreach programme, Sea Sense provides opportunities for learning as well as forums for community dialogue on issues such as gender inequality and the crucial contribution of women to marine biodiversity conservation.  Sea Sense is also working hard to develop tailored work programmes that support women fish workers to play their rightful role in the small-scale fisheries sector.  In 2019, Sea Sense conducted participatory mapping of women fish worker groups in the coastal zone in order to better understand their challenges and identify entry points for capacity building programmes.  More recently, Sea Sense has contributed to leadership training for the committee of the Tanzania Women Fish Workers Association (TAWFA), which is a national platform for advancing the rights of women fish workers.

Sea Sense first met Hadija in 2018, during a national workshop on the FAO Voluntary Guidelines for Securing Sustainable Small-Scale Fisheries, where she spoke so passionately about the need for raising the visibility of women and gaining recognition for their contribution to the sector.  Her tireless commitment has resulted in her election as the General Secretary of TAWFA.  At a local level, Hadija and her fellow women fish workers were motivated to establish the Association of Women Fish Workers and Processers of Marine Fishery Products (WAMABA) in Mtwara, which is composed of ten women’s groups in the vicinity of Mtwara Rural.  Hadija has been elected to serve as the General Secretary of the Association.

Hadija’s hard work is paying off!  Last month, Hadija received a call from the United Nations Development Programme (UNDP), to inform her that a recent grant application had been successful.  The project grant will provide material and training support to seven groups of women involved in aquaculture including the construction of modern concrete ponds for tilapia farming, training on fish farming techniques and financial management and support for market access post-harvest.  Reflecting on the funding success, Hadija extending some words of appreciation to Sea Sense. “In a special way I am very grateful to Sea Sense for the way they have been supportive to women involved in small-scale fishing.  They have helped me in preparing various grant proposals and presentations at several workshops.  They also helped me to get financial support so I could take part in the Nane Nane exhibitions in Ngongo, Lindi. I will continue to call on various organizations to support women involved in fishing to bring about sustainable development and resolve the challenges affecting women”.

Sea Sense is proud to support Hadija and other women fish workers and will continue to promote the rights of women to participate fully in the small-scale fisheries sector. 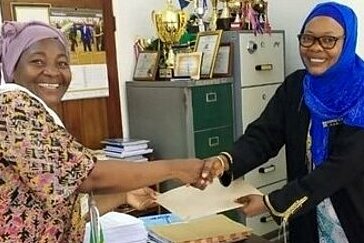 Hadija (left) submitting a document for the regional introduction of the Tanzania Women Fish Workers Association (TAWFA) to the Regional Administrative Secretary of Lindi Region.
back-to-top