EDUCATING THE NEXT GENERATION

The ability of the younger generation to advocate for the sustainable use of coastal and marine resources is dependent on the knowledge imparted to them as well as their confidence to speak out and take action. As one of our key strategic focus areas, Sea Sense puts this into action through our Education and Outreach programmes such as the one run during the month of February, in three secondary schools in Kilwa District.

The programme aimed to raise awareness of marine ecosystems and endangered wildlife, as well as the role of strong leadership in environmental conservation. The students gained knowledge on the importance of mangroves, seagrasses and coral reef ecosystems as key habitats that support endangered marine wildlife such as sea turtles, whale sharks and dugongs that inhabit the coastal waters of Tanzania. The interactive sessions enabled the Sea Sense team to explain the importance of marine biodiversity, and in particular, the relationship between biodiversity and the livelihoods of local people.  As the activities progressed, students displayed increasing curiosity about marine wildlife and asked lots of questions about the biology and ecology of sea turtles, dugongs, and whale sharks.

Students were also able to work on their communication skills by writing essays about what they had learnt, drawing visual representations, and expressing themselves vocally during school debates. This allowed the knowledge to be fully absorbed and comprehended by the students. The debate topic asked: ‘Is it important for a young person to be involved in the conservation and management of marine resources?’. The debate teams were judged on how they presented their ideas, defended their arguments, and refuted their opponents, with the winners being awarded with stationary kits for use at school.

Offering young Tanzanians such platforms to reflect on their role in conserving marine life and its importance to local livelihoods develops a passion and enthusiasm for conservation, which needs to be nurtured from a young age.  One student from Dodomezi Secondary School echoed this by calling on the government to “take strong action against all those who are involved in destructive activities such coral harvesting for construction and mangrove deforestation, as these practices damage the marine environment”.

Sea Sense continues to seek partners and funding opportunities to expand our education and outreach programmes, so that we can continue to educate the next generation about the importance of safeguarding their environment and promoting good leadership. Visit Sea Sense on Facebook or Twitter to share your thoughts! 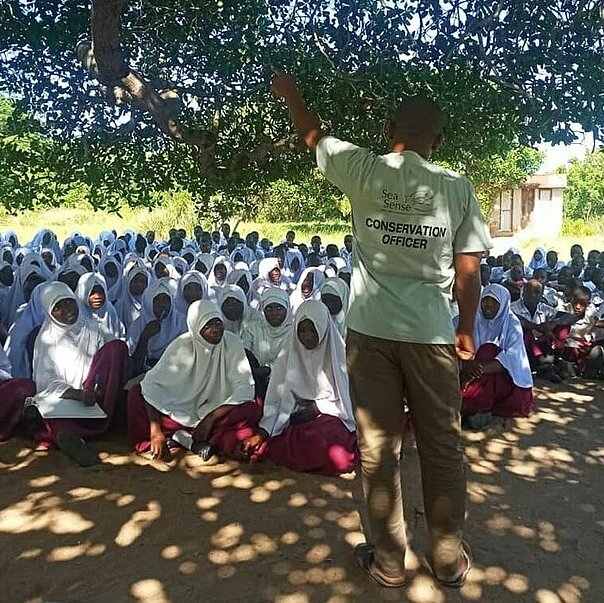