LEADING THE WAY ON MANGROVE RESTORATION

Mangroves are critical ecosystems that have multiple ecological roles.  They support rich biodiversity, are crucial for fisheries productivity and store vast amounts of carbon, which is key in the fight against climate change.  World Mangrove Day is celebrated each year on 26th July, to highlight their importance in maintaining healthy marine ecosystems.  In Tanzania, mangroves are found along many parts of the coast, although the Rufiji Delta supports 50% of mangrove cover in the country and is the most extensive estuarine mangrove forest on the eastern sea­board of the African continent. Sadly, mangroves in Tanzania and across the world are being lost or degraded due to conversion for agriculture, aquaculture and saltpans, and extraction for domestic uses such as firewood and house construction

With funding from Bloomberg Philanthropies as part of their Vibrant Oceans Initiative, Sea Sense is working with community members across 10 villages in Lindi District to strengthen management of marine resources, including mangrove forests.  Sea Sense has trained more than 300 community fisheries managers and village leaders, and each village has been supported to develop a five-year fisheries management plan, which includes actions to reduce threats to mangroves, coral reefs, and seagrasses.  Two of the villages have prioritized mangrove restoration, having witnessed the degradation of their local mangrove forests and the subsequent increase in beach erosion within their villages.  Their ambitious plans to plant 20,000 mangrove trees over the next five years are already underway. Between April and June this year, community members in Mchinga 1 planted 2,000 mangrove saplings.

In explaining their achievement so far, Hawa Kiinga, chairperson of the community fisheries management organisation, known as a Beach Management Unit, said “Due to excessive beach erosion and the loss of some marine species including prawns and crabs, which are of economic importance in our area, we decided to plant 20,000 mangroves trees in five years, and to start, we have already planted 2,000 mangroves trees of Rhizophora species”.

Elaborating further on the mangrove restoration project, Hawa said “We thank Sea Sense for the training. We realized that mangrove resources belong to our community, and if we don’t take care of them, nobody will do that for us.  We were able to identify the issue that caused our marine resources to deplete and decided to change that problem into opportunity for improving our marine ecosystems, starting with mangroves.  We identified the areas that were badly affected by bait digging and mangrove harvesting for human use and creation of salt pans”.  Fisheries managers and the village government of Mchinga 1 are currently in the process of formulating local bylaws that will enable them to take action against illegal mangrove harvesting. 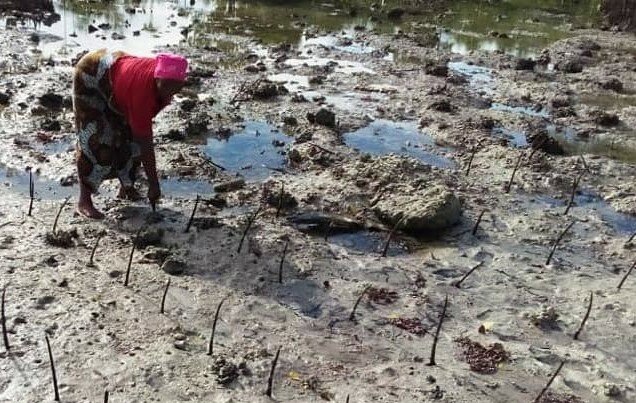