Sea Sense Conservation Officers are the unsung heroes of our world. They protect sea turtles from many threats including predators, and they preserve the marine environment so that we can continue to enjoy it.

Ms. Anna Neneu is a Sea Sense Conservation Officer in Mbutu village in Kigamboni Municipality, Dar es Salaam.  She is also known as ‘Mama Kasa’, a nickname given to her by her community. She started her marine conservation work five months ago and has made great progress since then.  She has built close relationships with many local fishers in her village, and they are now supporting her sea turtle conservation efforts.   During her daily foot patrols of nesting beaches, Anna has recorded three green turtle nests and monitored the 267 eggs during the incubation period.  All three nests have hatched successfully, and 261 hatchlings safely reached the sea.

However, there are many challenges that Conservation Officers like Anna face on a daily basis.

Anna declares that being a Conservation Officer is no easy task. “There are many challenges and obstacles in this line of work. One of the biggest challenges is that people often don't understand why Conservation Officers do what we do. They don't realize that we aren't just out there trying to catch poachers and prevent people from hunting sea turtles or fishing illegally—we're also there to make sure that our ecosystems stay healthy, so that future generations can enjoy them as well”.

Also, the long distances that Anna needs to walk every day to reach the nesting beaches and to patrol the beaches themselves, is another challenge that she faces.  Despite these challenges, the sincere efforts she has made in her work and the good cooperation that she receives from her community, especially the fishers, is encouraging her to overcome the challenges that she faces. 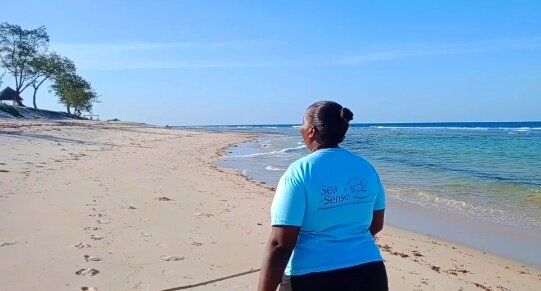